July 20th, 2012 marked a big day for Nutrex as it celebrated two milestones: On one hand it was Nutrex’s 10 year anniversary; On the other hand the company proudly hosted the ribbon cutting ceremony for its new 80,000 sq ft state-of-the-art corporate headquarters located in Oviedo, FL.

What started 10 years ago as a dream and an idea has grown into a remarkable success. Hard work and quality products allowed Nutrex to become a major force in the dietary supplement industry. During his ceremony speech, Nutrex President Jens Ingenohl remarked: “When people see this magnificent building they can hardly imagine the hardships the founders of this company went through in the early years. Having been through it all from day one teaches you how to appreciate success and growth: I never ever take it for granted!”

What is a great success for Nutrex is also good news to the local community. “To see a building project like this come to fruition in a still ailing economy is a great thing for our local economy and community” highlighted city official Bill McDermott in his speech.

While the first ten years at Nutrex have come to a close, this new building marks the beginning of a new phase. To quote Nutrex President Jens Ingenohl again: “The best is yet to come!”

Only three months later in October of 2012 the Seminole County Regional Chamber of Commerce recognized the company’s efforts and success. It honored Nutrex for its capital investment and job creation contributions within Seminole County. 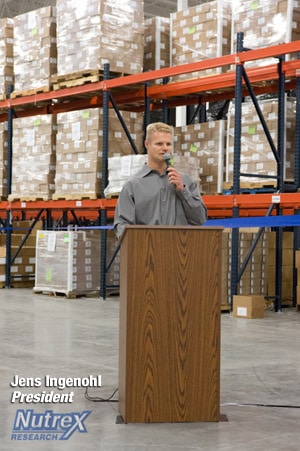